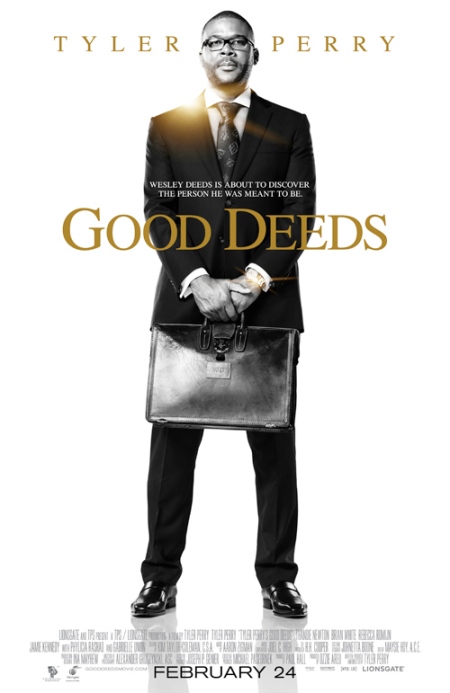 So the talented Mr. Perry doesn’t keep his fans waiting for long as he is known to push out at least two movies a year, a host of television shows and his beloved stage plays which have brought him to his current reverence. So, what is it about this particular project that makes me want to give Tyler Perry an achievement award? Possibly the fact that the story line for Good Deeds is absolutely compelling. Tyler has a way of introducing each of his characters in relatively dramatic scenes while allowing you to decide if you will root for the character throughout the movie or despise them the entire time. Side Note: At no point could I relate Tyler’s character (Wesley Deeds) to the overly eccentric Madea in some of his other films.

Although each character in the movie delivered outstanding performances including Brian White, Gabrielle Union, Thandie Newton, Jamie Kennedy, Rebecca Romijn and Mr. Tyler himself, I almost jumped for joy when the incomparable Phylicia Rashad graced the screen. She is undoubtedly one of my favorite actresses of all time and to see her in such an awesome role made me think back to her days as the stern, yet loving Claire Huxtable on The Cosby Show.

My favorite scene from the movie is when Lindsey (Thandie Newton) meets Wesley’s (Tyler Perry) mother played by Ms. Rashad during a celebration at the family’s corporate offices. Wesley and his family are well-to-do business owners and Lindsey just so happens to work for them as a janitor. Well, as you might imagine, Wesley is too good for Lindsey – according to his overbearing mother, and tension starts to fly quickly. What doesn’t help the situation much is Wesley’s jealous and irresponsible brother played by Brian White. The scene gets real ugly and you become unsure if you want to cry or cheer by the time things settle down. Because Tyler was able to jerk my emotions like a five speed car on a steep hill, I must say that this is one movie that I would have to give 4 HIGH Fives out of 5. I would have given it 5 HIGH Fives but I am still not sure if I liked the ending as much as I did the rest of the film. Either way, I highly recommend you see this one before it leaves theaters!

Movie of the Year! Tyler Perry’s ‘For Colored Girls’

As I entered the theatre the atmosphere was eclectic! The energy in the room was full of excitement with the anticipation of yet another Tyler Perry film.  I stared in sheer amazement as I watched a few hundred women of color walk through the theatre corridor. A vast sea of beautifully colored hues in different shapes and sizes representing the African American Woman.  At that moment I was proud to be among what we call “sister hood”. We walked in the theatre chatting with one another as if we’d known each other for years. I haven’t felt that type of connection in a long time. As I was walking to my seat a “sister” stated “you better get your tissue ready you’re going to need it. “ I thought, Oh no! Not more of the ‘Black Woman’s drama’.  We live through various forms of drama every day; surely I didn’t just spend $10.50 to watch it. But this was different.

For 2 hours we had to confront the demons that plague our past, present and future. These demons had names. They’re called rape, abuse, neglect, lewdness, disappointment and shame.  These are the demons the black woman endures on a daily basis; yet her smooth skin, full lips and ample hips help mask the scar that’s been hidden for centuries in her very core.

This film should be seen by women of all ages, races and creeds. As for men, I would say this is a movie they may not want to see but need to see. Spiritually speaking; in all thy getting, get an understanding.  Anything you don’t understand, you may have a tendency to misuse.

“Somebody tried to walk away with all your stuff; Now it’s your time to get it back! If you haven’t already, you must see this movie today!